The Theory of Unhappiness 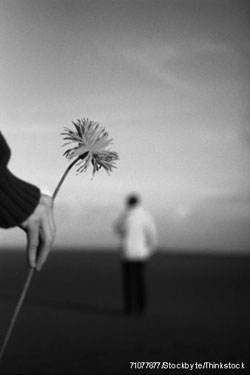 actions that arose out of apartheid, a mother came face to face with the man who had killed her son during the conflict.

She told him what her life was like without her son and what she went through in losing him.  She reached as deeply into herself as she could and felt and expressed her remorse honestly.   She focused on herself and made no mention of him and his actions.

The man then spoke and told her what it was like to be recruited to set up someone for something they didn't do, and then kill them.  He reached as deeply into himself as he could and felt and expressed his remorse honestly.  He focused on himself and made no mention of her.

Witnesses to the event said that what happened next surprised them all and held an unforgettable teaching.  The man cried out in his native tongue, "Please, please forgive me, my mother."  At the same time, the woman, in her native tongue, cried out to the man, "I forgive you my son." They spoke in different dialects so they couldn't understand each other's words.

The Commission came to describe forgiveness based on that event.  For me, the BreakThrough Steps epitomizes what the Commission described.

This concept is extremely valuable to human beings as long as we live in blame/victim consciousness.

While we live life from a place of blame and victim consciousness, focused on externals, we cannot hope to reach deep into ourselves. Not only does blame and victim consciousness set us apart from our self, it sets us apart from others. While this is the status quo of the individual, we live in a state of apartheid within and without. We live from a place that sees everything as divided.

In the BreakThrough Steps process, we take responsibility to the other for our actions with the understanding that no amount of focus on the other's actions will give us relief. We say we are sorry, because it's the truth, we are, but we are often not aware of it until that moment during the Steps, because, up until that moment, it seems easier to blame the other.

My story really only begins here.

My son, hooked on the high that crack gave him, stood in front of me and, by his words to me after, went to the very depths of his own despair when he asked me, with a knife held to his throat, one wrist already dripping blood, "Should I do it, mom?"

I sped down the road of remorse myself when the thought came into my mind, "Yes, if your life is that bad, do it."  That is the most horrifying and despairing thought and feeling I have ever had as a human being.  I don't want anyone to know I had that thought.  I don't want to think about having that thought.  How could I think that?  I didn't mean it.  I asked him to give me the knife, but he wouldn't.  I told him I loved him and broke down, and sobbed while I begged him to give me the knife and to not hurt himself.

It seems to me that Cody and I were on the path to the depths of despair long before we noticed it and neither of us knew what to do.  We just knew that something had gone terribly wrong.  We were asleep, living our lives unconsciously.

The trauma took a few minutes.

The fallout lasted years and BreakThrough helped me through it.

I have come to see the BreakThrough Steps as a form of truth and reconciliation.  They continue to show me the power, and true definition, of honesty.  For most of my life I didn't know that honesty meant staying exclusively in my own business, no matter what any other was doing.  I was so addicted to the other, oriented to the other: pleasing them, blaming them, that I thought honesty meant telling the other person what they were doing wrong.  I was 'standing up' for myself, but I can see now that I was doing it by blaming the other, not really 'standing up for myself'.  My version of standing up for myself caused me unhappiness.  I began to see, through the Steps, that every time I blamed the other I was also simultaneously unhappy.  I began experiencing the relief and happiness I felt every time I took responsibility for my actions and felt what I was feeling, no matter what the other was doing.

Recently, the third Step in the BreakThrough Steps happened of it's own volition, outside of the formal Steps, which once again, shows me that the principles upon which the BreakThrough Steps are built, are in alignment with the forces and laws of nature.  In this Step we unlearn the unspoken mantra of blame: "No matter how I feel or behave, someone else is responsible."  We teach our children they are responsible for their behavior but blame someone else for our own.

My son and his new wife came to Mexico to visit, and he stayed up all night talking to my husband.  When I awoke at 5:30 in the morning, I joined them.

My son looked at me and cried.  He said he was so sorry for his actions. I watched his remorse and felt my own rising up.  He reached deep inside of himself and described how he felt holding that knife to his throat in front of me. He focused on himself and made no mention of my actions.  He took full responsibility for his actions.

I looked at him and cried.  I reached deep inside of myself and described how I felt watching him with that knife and how I felt having the thought that if his life was that bad, yes, he should do it. I focused on myself, and made no mention of him or his actions.  I took full responsibility for my actions.

We met in our suffering, and then in our humanity and then it was over. There was nothing left to do but hold each other.  BreakThrough is the shortest distance between two people.

It seems impossible and too simple for the outcome of taking responsibility to be relief.  It seems easier to continue to blame the other and take no responsibility.

It seems that events in our lives are not up to us.

How we react is.

The cause of unhappiness is not taking responsibility, to ourselves and to others for how we feel and behave.

Taking responsibility for ones own actions is the simple and uncomplicated recipe for joy inside of a human being.

You're never too young to receive the benefits of a BodyTalk session.