BodyTalk in Tacloban: Healing by Tapping 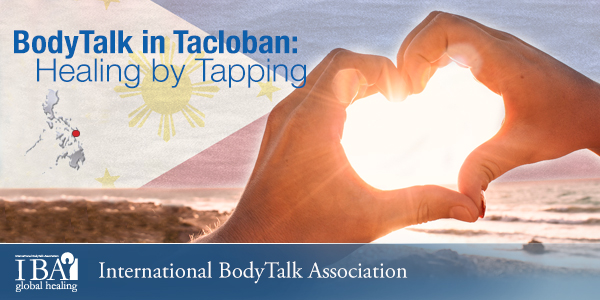 BodyTalk in Tacloban: Healing by Tapping
By Marilen Abesamis

"I could not move my feet when I came, now I can dance."
"My back was so painful. Now it feels so much lighter."
"I had a severe headache, but now its gone. I feel so sleepy instead. I love it."

These were some of the remarks of the  twenty healthworkers and priests who gathered for a class of BodyTalk Access techniques last Feb 2-8 at the Redemptorist Church.

The Redemptorist Church on Real Street, Tacloban, had been kept wide open to 3000 people in the aftermath of Yolanda, and more recently on January 30 when howling winds and news of another storm pushed 160 families back into the church, and an army of nuns struggled to serve lugao to the disoriented crowd.

The past week, Fr. Edwin Bacaltos, CsSR, its parish priest, who had been an amazing center of calm, again opened wide the convento doors for BodyTalk healing of traumatized Tacloban poor.

On the second day of class, one healthworker said, "I did BodyTalk on my husband, and he felt so good after the Access techniques that he said, 'if this is what you learn from the Redemptorist Church, you ought to go back for more!' He had been wary of my staying out late at night."

Concepcion Nicol, 68, from the shattered barangay 57 of San Jose, brought her two  granddaughters to the next BodyTalk practice class.  The girls breathed heavily, cooperating intensely with Julius, the practitioner, and were soon relieved of their aches and fever.  Was it faith?  Was it the tapping and the breathing --- it didn't matter. The grandmother was profuse with thanks, and there was a round of clapping and smiles.

It is no coincidence that release, relief and laughter combine, for this place is also the shrine of the famous Our Mother of Perpetual Help.  It had been shielded from the harshness of Yolanda by the massive Protestant institution, Bethany Hospital, fronting it on Real Street.  Nowhere has Nature's ecumenism been so praised as in this Redemptorist convento.

Another healthworker Marilou Fusilero, 49, of San Jose town also expressed relief.  Until recently a nurse with Department of Social Welfare in the region, Fusilero said, "This BodyTalk therapy is so simple but comprehensive, it mends both body and spirit.  Among the poor, there is no problem accepting such a plain modality. In our situation, we cannot afford expensive medicine.  Access Technique calls for no drugs, no doctor --- it is very timely."

They echo what BodyTalk Practitioner Dorothy Friesen often said while training people in Access, "We use no pills, no needles. There are no material costs, we use only our bodies, just as God created us!"

"We are glad we don't need external help for this modality," Mila Baoy, a former Barangay official, said, "Aid comes too little and too late, anyway."

She echoed the words of  poet-artist Brother Karl Gaspar, who leads a highly committed  Redemptorist lay mission team to the afflicted areas (Tacloban,  Palo,  Tolosa, Tanauan, and Dulag). Last week, Brother Karl had written an impassioned letter to the Association of Religious Superiors in which he said:

"By February 16, it would have been the 100th day since Yolanda struck.  But as one goes around the city and the adjacent coastal areas, one is confronted with despair.  One wonders where the billions raised by the international and local aid agencies has gone if one views the reality on the ground."

"Except for cash for work projects, temporary shelters and tents, distribution of housing materials as well as seeds and farm implements, very little has reached the survivors."

So a health modality that requires no external assistance and no props other than human hands, is like a breath of fresh air.

Such that the young Fr. Raimar Soliza, CsSR, has seamlessly incorporated BodyTalk Access Techniques into his house blessings and rituals for Tacloban survivors.  At Barangay 60, where people say there are still many unclaimed bodies under the debris, participants at a community blessing say their prayer is for "good health" for everyone and to be kept "safe from further calamities."

So Fr. Soliza ends the session with everyone tapping, tapping, tapping their heads and their hearts. And letting the Spirit take over.Canadian-based Trainor Dorothy Friesen will hold Access Classes on Feb 16, 2014 at the Good Shepherd Convent on Aurora Boulevard near the LRT Katipunan station, Quezon City. US-based Advanced BodyTalk Practitioner Ben Manalo will give BodyTalk Fundamentals on two weekends (Feb 22-24 and March 1-2) at deeply discounted rates at the same venue.  For fees and information, call Alan Along 09233154530 or Annie Lao 09178219587 or write to dorothyfriesen@gmail.com

BodyTalk Access was developed for the lay person or as a one-day introduction to the larger BodyTalk System. BodyTalk Access is ideal for first-responders in emergencies.