"The point is, to live everything. Live the questions now. Perhaps you will then gradually, without noticing it, live along some distant day into the answer."
– Maria Rainer Rilke 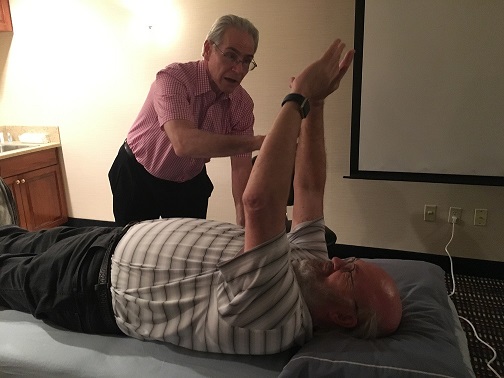 In February, I enrolled in The Soul's Journey: Exploring the Mind and Three Brains course taught by Dr. John Veltheim in Phoenixville, Pennsylvania.

The calling to do so was very strong.

I knew that the course would be profoundly life changing, and that I needed to be in Phoenixville, details not specific. A part of it had to do with an image of the mythical phoenix rising from the ashes that appeared in my consciousness, and this archetype of alchemy reassured me that I was on the right path. As someone who is interested in Egyptology, I smiled at my synchronistic discovery that the location of the course was very near Egypt Road.

There also seemed to be a connection to a recurring dream I have been experiencing. In the dream, I discover with great anxiety that contrary to what I thought to be true, I never completed my college degree. There was a missing course on my academic transcript, and it was always philosophy. When I read about The Soul's Journey, and saw that it combined a broad discussion on the soul and the nature of existence with tools to maximize utilization of our three brains, my instinct reacted like a Pavlov puppy.

I let go of the need to understand and instead followed my gut instinct, coincidentally, or perhaps purposefully, to a course that illuminated the importance of that very third brain of the digestive tract, one that has been both underestimated and misunderstood by the scientific community. This was already a breakthrough for me, since I often make decisions primarily with my head brain or by "following my heart." The latter, after all, is what we are so strongly encouraged to do in this new age.

So how does the functioning of the three brains relate to questions on the meaning of life and the practice of BodyTalk?

The course helped me to understand the power of filters, and how an original thought from the Higher Self isn't original anymore once subject to biases of not only the head and heart brain, but all three brains. Even the search for truth on the meaning of life goes through filters of our own genetic wiring, lifetime(s) of experiences, and exposure to an infinite number of cultural and spiritual perspectives.

We can help to transcend this, however, by shifting our consciousness to understanding the interplay of all three brains and seeing life as holographic with no right or wrong answers. As we process our own experiences in this more relaxed and "bigger picture" manner, our interactions with others improves, and day-to-day life becomes more meaningful.

For BodyTalk practitioners, understanding that what we perceive as coming from a client's innate is subject to many layers of filtering allows for better functionality in practice. Consequently, it was exciting to hear that this important topic will continue to evolve in future BodyTalk material.

Throughout the course, John provided us with specific meditative techniques to balance and strengthen the three brains, including focusing tools of sound (mantras) directed to each energy center. He also demystified many concepts related to the soul. The awareness of that knowledge in and of itself served to empower me and deconstruct fear and the many ways it can manifest. The information was timely, as both the personal and collective psyche currently struggles to clear out the energetics of fear in order to make space for love.

To add to the already amazing matrix anchored by the BodyTalk Middle Atlantic Association in Phoenixville, two scientists at the forefront of energy medicine, Drs. James Oschman and Charles Krebs, were invited to take part in the course by John. Their presence was invaluable, as they were able to fill in gaps in our understanding of topics ranging from neurological functioning of the brain to the subtle workings of the body-mind complex.

James Oschman, PhD is President of Nature's Own Research Association in Dover, New Hampshire and one of the first academic scientists to investigate the research basis for complementary and alternative therapies. His name may seem familiar to many in the BodyTalk community, as he spoke at both the 2013 and 2007 IBA Members Conferences on the science of consciousness and energy work.

With academic credentials in Biophysics and Biology, James is the author of six books, including Energy Medicine: The Scientific Basis, has written nearly one hundred scientific articles, and lectured in 25 countries. Like so many, it was a physical ailment, and in his case, back pain, which led James to energy healing. He discovered Rolfing to great success, and it was this experience, as well as a powerful handshake with its founder, that set him on a quest to understand the nature of energy, how we sense it in our environment, and how it can be measured and documented. Mostly, he wanted to immediately strive for top scientists to respect him.

And respect him, they did.

James ultimately taught Rolfing to doctors, and Biophysics to practitioners of modalities such as Rolfing, Craniosacral Therapy, and Feldenkrais.

James told me, "When you provide sound and simple explanations of your work and the amazing results you achieve, skepticism and lack of understanding disappear."

Charles Krebs, PhD is co-author of the landmark Energy Kinesiology: Principles and Practice and A Revolutionary Way of Thinking, as well as a number of other books, and has academic credentials in Biology and Physiology. Like James, he was led to energy medicine due to a physical condition, in his case, limited use of his legs after a scuba diving accident. During his recovery, he utilized a number of alternative and complementary therapies. After just one session in kinesiology greatly improved his condition, he began to synthesize knowledge of the body and brain from Eastern texts to the latest in Western neuroscience.

In asking how the brain works, he discovered that the solution must be in integrated brain function, that is, the re-synchronization of brain neurology. He co-founded the Learning Enhancement Acupressure Program (LEAP) to help people correct learning disorders. As BodyTalk tells us, integrated brain function translates to higher level functioning in all areas, including strides towards greater self-actualization, which is our soul's journey.

Charles echoed this himself when he said, "Every part of medicine is frequency, and I want to give a biological basis to frequency medicine, a credibility by giving a model of what works."

A number of lucky Soul's Journey participants lingered after class one day and were able to witness an impromptu demo by Charles on John. Charles held acupressure points and muscle-tested with the use of magnets in order to find frequency patterns of inactivity and ultimately correct them. The results were astounding and moment-defining, as three of today's most prominent energy medicine leaders shared a healing space made possible by the wonderful, supportive matrix in Phoenixville hosted by the BodyTalk Middle Atlantic Association.

It is very exciting news that we can see more of both Charles and James at the upcoming Members Conference in Clearwater, Florida, as John invited them both to speak. You can view the Conference website and the full lineup of presenters HERE.

As the course ended, I thought about my experience over those three days, the archetypal imagery of the phoenix, the synchronicities, and the recurring dream about a missing philosophy course. It was my gut brain that led me here to fill gaps in my own understanding of life, and like the mythical solar bird, I was renewed as I transformed my relationship with fear.

My gut brain wanted to be heard once again as I instinctually asked James for any words of wisdom for these challenging times we live in, and his reply, of course, was very holographic in nature.

He pointed to his veiled t-shirt with a Flower of Life pattern that I recognized from my Egyptology studies, and suggested, "Put your arms up to the sun, chant OM, wear this image, and walk barefoot in the sand."

Thank you to everyone who made this course in Phoenixville possible and for a dream finally realized. Next up, here comes the sun – and sand.

The BodyTalk System stimulates your body's innate ability to heal itself at all levels and anyone can learn the basic techniques taught in the Access Class.

> Find A Seminar Near You