How spirit, playful joy and presence let you BE successful 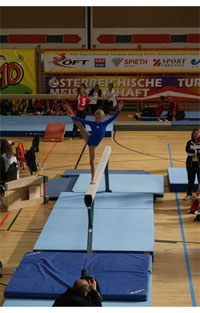 Maren, my 8-year-old niece takes great delight in doing artistic gymnastics. Two years ago she joined the local gymnastics club in her hometown Salzburg and started doing gymnastics once a week. Last year she was asked to join the Austrian All-State first team and took part in a competition for the first time – it gave her great pleasure and she wanted more...

Her coach had nominated her for the Austrian championship that took place on the last October weekend 2010. Accompanied by her Mom, her little brother Raphael, her grandmas, Cousin Felix and her Aunty she entered the sports hall where crowds of 6- to 15-year-old girls were already busy on the different apparatus.

Maren appeared to be really calm but also a bit lost in view of the crowd – she had never been to such a big event. Her coach made her feel secure and it was fascinating to watch how our little one changed when she came near one of the apparatus.  Already during her warm-up I discovered something marvellous: Maren was suddenly oblivious of everything around her and there were merely she and her routine. She was all focus – thank you Maren for showing me so clearly J.

Having been supported with BodyTalk from an early age – regular sessions by her Mom and sometimes me - now seems to bear fruit. The beauty about this is that this young lady is launching her career with so much delight, enthusiasm and ease. We are all firmly convinced that she is embarking on a high quality career.

Her routines, so she says, run so smoothly, like "a walk in the park"....as for my part, I find that fascinating. Clearly there is much commitment and training involved but never drudgery, physical or emotional stress.

Two days before this competition, Maren had asked me for a session, she told her mother about a dream she had had. In this dream she managed the most difficult part of her routine on the balance beam easily and this scene appeared again and again....MS workshop?

In short...she won the Austrian championship in her age group and very humbly received her medal. After the award ceremony Maren said that she was already thinking about her next task. What could that possibly be?

"Tomorrow I would like to play with my dollhouse-store – please get it for me from the cellar!" she asked her parents when they arrived back home.