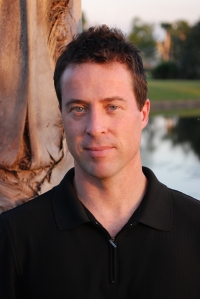 Have you ever really felt and understood your clients' physical pain? Or what's causing it physically and emotionally?  Are the emotional patterns and belief systems causing it or is it due to the fascial restrictions?  Understanding the bodymind on this level is invaluable to your practice, your results and ultimately, your success.

Let's say your client, Bob, comes in for a session. He is complaining of constant pain between his shoulder blades, shoulders and neck.   He also mentions that he is having difficulty with anxiety issues.  In Structural Integration Concepts, I teach practitioners to "try on" their clients' postures for a more comprehensive experience of their total bodymind states.  So you imitate his posture and realize that his hamstrings, shins, ankles and abdominal muscles must be very tight and restricted in order to maintain balance.  You very quickly understand (because you can feel it) why his upper back and lower neck muscles are having to work so hard.  But there is more, you also start feeling his emotional state in your own body . . .

Just as organs, joints and all body parts reflect specific consciousness and emotional patterns, so it is with fascia and fascial restriction patterns.  A deeper understanding of this massive system that connects each body part as well as transmits and stores communication allows us to radically expand our view of the physical body as well as the consciousness reflected in it.  Let's consider the ankles; we know that the feet and ankles represent moving forward in life but the joints are controlled, moved, and protected by the fascial and muscular system around them.  Adding the understanding of fascial and muscular patterns, we learn that the lower leg muscles represent control, insecurity and fear of the future.  In addition, when we consider the ankles functionally (in motion) not just structurally, we learn that they represent being able to slow down, stop and realign life direction.  This expanded view of the body parts and connective tissue dynamics enhances our understanding of the ankle tightness and foot pain as well as the possible emotional issues. Many times, we tend to look at one body part in one plane of motion and assign it one meaning.  But as body and consciousness dynamics have been further understood, we must acknowledge that, while body parts may have one common theme, they also have many different dynamic variations on that theme. 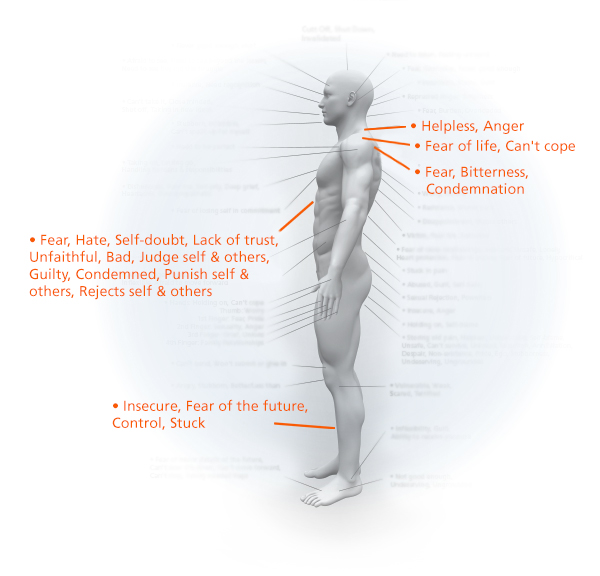 Another piece of the story to consider is physical and emotional compensations. Compensations occur in the body when there has been trauma, overuse or emotions that are not handled properly.  Your brain will direct your body to restrict or over lengthen various areas of fascia to help you cope with the trauma and also be able to function in gravity. As the compensating tissue in the body is the tissue that is feeling the pain, addressing only that tissue will at best give it short term relief but will actually make the pain worse as we drive the body further into dysfunction.  The real culprit and priority is the restricted fascia that is over working our painful tissue. Structural Integration is all about understanding the real restriction and priority area of fascia to be released in order to get to the root of the pain or problem.

We also develop compensations in our belief systems and emotions in the same way that we do in our fascial system.  In fact, most of the beliefs and emotions that our clients are aware of in their own lives are mostly compensations.  The deeper, causative beliefs are subconscious and individuals are, for the most part, unaware of them.  Being able to uncover and understand their real priority fears and beliefs gives your clients the biggest shifts in their health and life.  This is an area that we also need to understand to have effective BodyTalk sessions.  The area where we are feeling the emotional pain is just a compensation for a deeper belief pattern that needs to be addressed.  The body will compensate with beliefs and emotions to keep itself balanced.  Just as with fascia, it compensates to cope with life but is a recipe for more pain, disease and dysfunction.

Let's get back with Bob for a moment.  He is experiencing pain and anxiety.  He feels it in his upper back and lives in constant stress.  We could massage his upper back, do some bodygenics to clear out some worry and fear that he is stuffing there, but it will only give him relief for a few days.  If we addressed the restrictions in his lower legs, hamstrings, hip flexors, abdominal muscles and chest fascia, he would be physically pain free without us even doing anything with his upper back at all.  We would release the restrictive, causative fascia so that his upper back and trapezius muscles were no longer in a tug of war with the rest of his body and gravity.  Once the fascia and neurological habits the restricted fascia gives rise to have been released, his body will no longer need to hold and express the belief systems that he had to live out of because of his compromised posture and function.  Many times the bodymind will start to make up stories about a threatening environment or a point of view such as "not being enough" to be able to make it through life.  If these fascial restrictions last long enough, they become a habit and then the unhealthy beliefs start to become a part of them. Understanding structure and function as well as how to address the priority fascial restrictions may be the only way to get these emotions and beliefs to shift.

If the fascial restrictions were caused by unhealthy belief systems, we could address them with our Structural Concepts Advanced Active Memory protocol.  Since Bob has a lot of tension in his trapezius and upper back, we might assume that he perceives that he has a lot of burdens and responsibilities that he has to deal with.  It would be great if we could use our BodyTalk tools and just tap them out.  In Bob's case, this won't have the lasting effects we want. Knowing structural and functional theory coupled with the knowledge that we learn in Structural Integration Concepts, we see that since the lower legs and abdominal fascia are restricted we know that he is being run by a belief system around the concept of  "not being enough".

Not being enough usually shows up as self-doubt, fear, lack of trust and judgment. These deep feelings and fears may then lead to doing more and taking on burdens and responsibilities to prove and justify that we are enough.  Resolving all of the possible permutations of his "I'm not enough" belief systems, Bob will be able to "be enough" or not be triggered when he is "not enough." Once he believes he is enough, we can integrate that shift to the beliefs about having to take on burdens and responsibilities and the feelings of helplessness that are giving him pain and anxiety.  He can then stop, rest, move sideways and redirect his efforts to get off of the hamster wheel of life.

So if you or your clients have stubborn physical or emotional issues, there may be more layers to the picture than what you've been seeing.  Consider how the bodymind parts (emotional, mental, spiritual or physical) relate to each other and the whole – what connects them?  What restricts them?  How do they function in motion?  Can you feel it? Join us for my upcoming LiveStream of Structural Integration to go deeper into these concepts, as well as how to deal with chronic pain, sports injuries, stubborn emotional issues and much much more!

The BodyTalk System stimulates your body's innate ability to heal itself at all levels and anyone can learn the basic techniques taught in the Access Class.

> Find A Seminar Near You