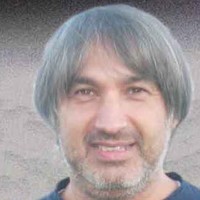 My professional life has been characterized by a rational approach to things with the need to prove everything in a scientific way. It was second nature to me, having studied in the scientific field and
achieving a degree in engineering. My work career started in a manufacturing company, then as controller in a Public Hospital. I've also been teaching IT since 2013 at the University of Padua in the Faculty of Medicine.
The flip side of being so left brained was evident in my playing music. I lacked spontaneity and I was never able to move to the next level because my abilities in composition and improvisation were limited. I felt the need to integrate my right brain more. My interest in alternative medicine was also motivated by the need to restore my health completely after an episode of depression I had when I was 18 years old.
So, in my spare time, I started discovering many alternative modalities as a client and by attending workshops. This led eventually to my journey with BodyTalk in 2013.
Following just my intuition, without knowing what it was, I decided to attend the Fundamentals course. I was impressed because it honoured my left brain and at the same time it challenged my right brain to work together. Furthermore, I found that it was a complete health care system and revealing the formula was a very fun and enjoyable part of the session.
The results I had with my personal health and with my clients led me to attend the other core BodyTalk modules. Then I also took MindScape to better use my right brain and eventually I became a Certified BodyTalk Practitioner in 2015.
The possibility to include other modalities in the protocol chart allows me to use the knowledge that I already have and offers the client my entire life experience following the priority sequence revealed by innate.
I have completed the following courses:
Other title:  Master Engineering degree 1997
Physics Radiation protection expert 2001
Bionathuropathy degree 2015