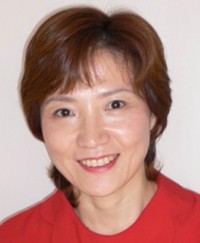 Miyuki is the FIRST Japanese CBP who lives and practices in Japan.  She feels very certain that all of her previous experience in her life till then was to meet with BodyTalk system and work with it.

She was an exchange student and graduated from high school in Michigan, USA. Upon her return, she acquired her Bachelor of Arts in English literature at Kobe College.  After she graduated college, she had been running an English conversation school and teaching English to the Japanese children aged 3 to 18 for twenty-seven years. She also trained some of her students to become her assistant teachers. While teaching, Miyuki has kept learning English to brush up her ability for her own career and for her dream to go abroad again to study psychology.  She met BodyTalk at just the right timing!  In summer of 2005, she was introduced to BodyTalk by her old friend, Yoriko Ogura, CBI who lived in the States at that time. She was inspired so much because BodyTalk is more holistic and practical than book learning psychology, which she has been seeking for.

Miyuki soon went to the States to take Module 1&2 twice and became the FIRST Japanese CBP who lives and practices in Japan in May, 2006. She went over to the States several times again and has completed all the BodyTalk advanced modules and Dr. John Veltheim’s BodyTalk Interactive course, and now she’s studying PaRama Unit 1.

Miyuki works not only for own but for BodyTalk matrix. In July 2006, she founded BodyTalk Japan with Yoriko to introduce this cutting-edge medicine based on consciousness and keeps on working to spread BodyTalk matrix all over Japan as a seminar coordinator.

In her private sessions, Miyuki gives comfort to her clients with her soft and peaceful atmosphere and helps them to let go of their bodymind burdens.